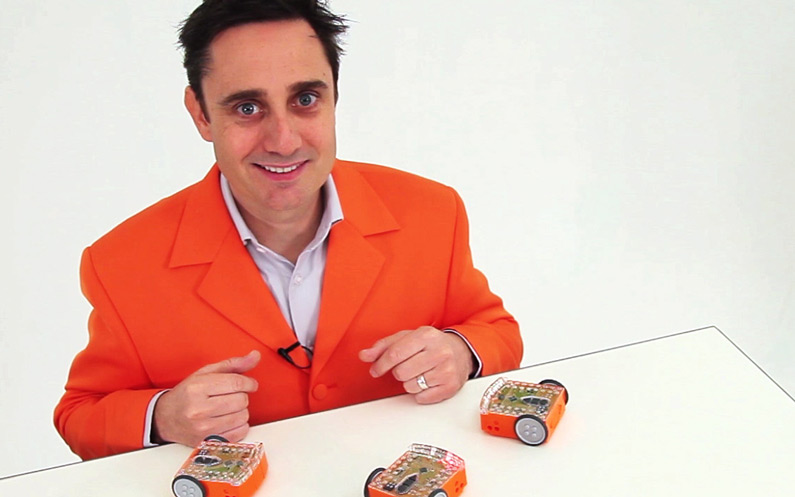 Hi, my name is Brenton O’Brien and I’m the creator of Edison. For nearly 10 years I’ve been having a ball creating all types of robots. Over this time I’ve launched some really popular robots that use my Microbric construction system. Success started in 2005 with the I-BOT that was a collectable through the Adelaide Advertiser newspaper. At the same time the Viper robot was launched through Dick Smith Electronics (for those outside Australia, think Radio Shack/Tandy) the following year the Ai2 robot was also released through the Advertiser newspaper. More recently the Microbot was launched in 2009. Altogether nearly 100,000 Microbric robots have been manufactured and sold in Australia and overseas.

And now comes Edison! Basically, I created a robot that I wanted, compatible with LEGO products, easily programmable, packed with sensors and cool features all at a super affordable price. I wanted Edison to be the easiest and most accessible way to get into robotics for enthusiasts and school teachers.

I had the initial idea for Edison way back in 2007, but so many other things got in the way of me exploring the possibilities of this little robot. Then, toward the end of last year a lot of my time became available for a new project – yepee! I successfully applied for a small South Australian government grant to help with the mechanical design (IVP grant) and development began in November.

I believe cost is one of the biggest barriers preventing individuals and teachers from taking up an interest in robotics. So, I needed to design the electronics with a strictly small budget. My solution to this is to ‘recycle’ components. I don’t mean recycling used components from other product, rather giving components multiple functions. As an example, Edison has an infrared (IR) light receiver component that performs three different functions. 1. Obstacle detection, 2. Receive commands from a standard TV/DVD remote control, and 3. Receive data from another Edison robot. There are many components that are recycled just like this keeping the cost down.

Inventing is the most fun part of robotics, so Edison needed to be programmable and expandable. I love LEGO, so making Edison compatible with LEGO products was a no-brainer. Programming Edison needed to be easy to learn, so EdWare was created. EdWare is a graphical programming language that uses drag and drop icons to form programs. I’ll cover EdWare in more detail in a future blog post.

Programming can be a big step for some people, so Edison needed a range of fun pre-programmed functions that anyone could use straight out of the box. To solve this Edison can read special barcodes that activate functions, such as line following, obstacle avoidance and remote control from a TV/DVD remote control.

I’m now preparing Edison to launch on the crowd funding website Kickstarter. Sign up to the newsletter to be the first to know when he becomes available.

Have a great day!